Interlock systems control the locking of two or more doors, so that if one door is open or unlocked, the remaining doors refuse access.  Interlocks are sometimes referred to as ‘Air Locks’ or ‘Tiger Traps’ and provide a high level of security.

Each door is electrically locked and monitored. The control electronics then generate a control signal to indicate when the door is closed and secure. Each controller also has a control input that will prevent the releasing of the locking device. By cross connecting these control signal 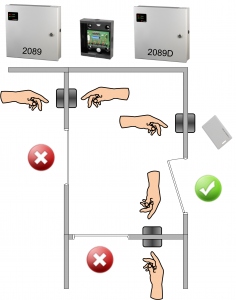 s, the door controllers communicate the door status, and only open one door at any given time.

Doors can be be normally locked (normal action) or unlocked (reverse action) to suit the application.  Doors may have full access control using card readers or keypads or can simply be released using push buttons or touch switches.

These terms refer to the standby state of the door.

In a “Normal Action” interlock the doors are locked and only unlocked when requested to do so. The request might be the simple pushing of a button or the successful authentication of identity. When this request is received the other doors are interlocked and the door lock is release.

In a “Reverse Action” interlock the doors are closed but not locked in standby. As soon as one door is opened the interlock causes all the other doors to become locked. The other doors will continue to be interlocked until the door is closed again.

It is possible to mix normal and reversed action interlocked doors in the same system.