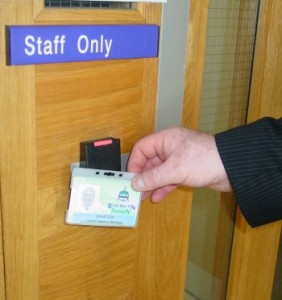 Council building security is an important consideration as they are often open to the public.  It can be difficult to restrict access to sensitive areas to authorised personnel only.

Steve Cox, central services manager for the Unitary Authority of Blackburn with Darwen BC in East Lancashire, is delighted with the P4.net access control system from Progeny, which was installed by Darwen based Atlas Alarms. He says, “Three major multi-user Borough Council buildings have the up to date P4 on-line, proximity card access system. Nearly 2,500 users now benefit from this very reliable and easy to use access control system.”

Steve, who is responsible for building management including security, decided to replace the previous swipe card system because it had become unreliable. He also needed a system that would be easy to extend as the need arose.

On the advice of partner company Capita and installers Atlas Alarms, Steve considered the Progeny P4.net system as a possible solution. Impressed by Progeny’s demonstration of their cost-effective on-line P4.net system, he decided to upgrade six doors to begin with and has since added 18 doors in two more council buildings. The installation now extends to 24 doors between the three main multi-user buildings – the Town Hall Tower Block (6 doors), the Old Town Hall (10 doors) and the Exchange Building (8 doors). 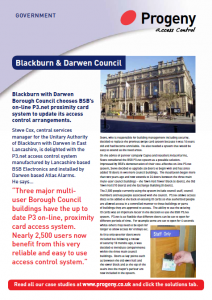 The 2,500 people currently using the system include council staff, council members and key people associated with the council. P4.net allows access discs to be added to the back of existing ID cards so that authorised people are allowed access to those buildings or parts of buildings they are approved to access. The ability to use the existing ID cards was an important factor in the decision to use the Progeny system. P4.net is so flexible that different doors can be set to open for different periods of time. For example, some are set to open for 6 seconds whilst others may need to be open for longer to allow access for trolleys etc.

At first only exterior doors were included but following a review of security, it was decided to introduce compartments within the three main council buildings. Doors at key points such as between the old town hall and the tower block and at the top of the stairs into the mayor’s parlour are now included in the system.

In introducing access control, Steve had to take into account the sensitive public meetings that are hosted by the council from time to time. Although members of the public need easy access to public areas of the town hall, it is crucial that Steve and his 11-strong team are able to limit public access within the building.

Steve found Progeny’s Doors Enterprise on-line system easy to use. He says, “The software package is compatible with standard operating systems such as Windows XP and Vista. We found that deactivating lost cards is simple, as is adding new users to the system”.  Steve is very happy with the high level of control the Progeny system offers. Access levels can be varied between different users and Steve can limit access to particular days and times. He says, “Normal access times are 7am-9pm, Monday to Friday but this can be varied for staff working in the evenings such as cleaners, who only have access between 4pm and 8pm. The system is very flexible so that staff working at weekend or those on call can be given appropriate access.”

The Doors Enterprise software allows Steve and his colleagues to look at live events and a permanent record is kept so that individual access patterns can be identified. Alternatively, use of a given door can be analysed too. The on-line system allows Steve to use cost codes to recharge costs to different departments within the council.

P4.net is very reliable, easy to understand and straightforward to use.  Steve has only called on the Progeny support team to provide training and advice when he has wanted to upgrade and extend the existing system. He has been very impressed by the quality of the support provided by their Customer Support Engineer. He says, “He is very knowledgeable and informative, nothing is too much trouble for him. He readily explained how simple it is to update both the hardware and software. I am really pleased we have chosen Progeny P4.net system, it has been a first class decision and it will serve us extremely well for many years to come.”

Ian Bend, Technical Director at Progeny recalls that P4.net flexibility was crucial in being able to accommodate the thick stone walls of the original town hall, which is a listed building. He says, “The very thick stone walls at the old town hall meant it was difficult to run twisted pair network cables. However, the IT department was able to provide Ethernet access points so the P4.net controller was used at each door. These were then addressed via IP. This saved planning permission, a lot of expensive drilling and disruption to the council offices. The P4.net system then also allowed the remote buildings to be included in the one system. Two client workstations were loaded with the software so that more than one staff member could administer the system.”

Council building security across the country has been improved by Progeny systems.